By Mark - Garden for Pleasure Propagation Feb 10, 2016 Comments Off on Dahlias – increasing your stock from softwood cuttings 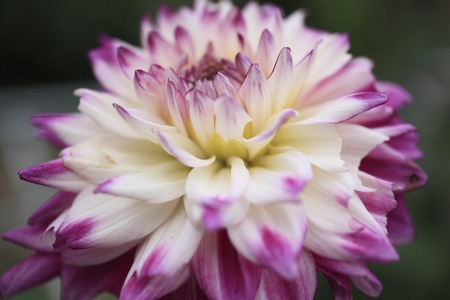 Dahlias are the shining jewels of the late summer border.  They burst into bloom from July until they are cut down by the first frosts, filling the gap after the earlier flowers have faded.  A little winter preparation can lead to a dazzling display later on.

Both newly bought tubers and those you may have stored throughout the winter days can be used to grow new cuttings to increase your stock and fill your borders with colour.

In February simply place the tubers, either several in a shallow tray of moist multipurpose compost, or pot up individually.  The crown should be above the compost surface.  Then put them into a heated greenhouse or propagator in good light.  The minimum temperature should be twelve degrees centigrade or fifty-four degrees Fahrenheit.  Misting can help to form buds.

After two to three weeks shoots from the tubers should reach eight to ten centimetres or three to four inches in length.  At this stage softwood cuttings can be taken.  You will know if the stems have become too mature for cuttings as they will become hollow.  A small section of stem should be left on the tuber.  From this point further batches of stems will grow to use as more cuttings.  Also the original tuber can later be planted out to flower in the garden again.

Trim the cuttings below a leaf joint removing all but the top two leaves.  You may wish to carefully dip the cuttings in a fungicide and dip the bases into hormone rooting powder.  Several cuttings can be stuck into pots or trays, although individual cells can  make the resulting plants easier to handle later on.  They should be placed in a propagator at a temperature of around ten to thirteen degrees centigrade or fifty to fifty-five degrees Fahrenheit.  Enough roots should have formed after two to three weeks to individually pot up each cutting into a small pot.

For now the pots should be kept in the warm until the risk of frosts has passed.  This will usually be May in Southern areas of the U.K, but will be later further North.  They can then be planted out in their final spot in the garden.  Keep an eye out for pests such as aphids and red spider mites and treat accordingly.  Pinching out the growing tips around three weeks after planting will make the plants bushier.

To view a selection of Dahlia tubers at Crocus click here

If you have enjoyed reading our blog post then why not fill in the form provided to allow us to send you our blog posts and newsletters by email.

Any cookies that may not be particularly necessary for the website to function and is used specifically to collect user personal data via analytics, ads, other embedded contents are termed as non-necessary cookies. It is mandatory to procure user consent prior to running these cookies on your website.